Hemipterans are known for their piercing/sucking mouthparts, and many of the members of this order are known to be phytophagous and cause economic damage to crops (Schuh and Slater 1995). This group has the potential to be a threat to the health of the V. globulare plants in Montana. Two hundred fifty-five individuals, from a variety of Hemipteran families were collected from the leaves and stems of V. globulare plants, but based on the numbers collected and known biological information (Schuh and Slater 1995), only the Cicadellidae, Aphididae, and Miridae suggest any biological association with the plants.

The Cicadellidae collected were keyed to subfamily and sorted into seven morphospecies. All specimens belonged to the subfamilies Typhlocybinae and Aphrodinae. Typhlocybinae is a large, diverse, and widespread subfamily of leafhoppers with many species known to be of economic importance (Beirne 1956). In other parts of the world, Typholcybinae are associated with trees, shrubs, or other low plants and most species have a very narrow host plant range or are specialists on a single plant (Le Quesne and Payne 1981), though species recorded on Vaccinium have been collected on multiple host plants (Dmitriev 2016). Aphrodinae is a relatively small but widespread subfamily of leafhoppers with some species known to vector plant pathogens (Beirne 1956).

Much of the research on leafhoppers and their hosts has focused on agroecosystems and the damage caused by this group is often initially overlooked or attributed to some other cause due to the individual insects’ small size and cryptic nature (Fox 1928, Beirne 1956). The only known attempt to catalog the leafhoppers in Montana was in 1928 and was primarily a survey for the sugar beet leafhopper (Fox 1928). Nothing is known about the assemblage of species that inhabit the forested, montane habitats in the state. However, leafhoppers have been shown to be destructive in native grasslands (Wilbur 1954) and evidence has suggested that non-crop plants may be a source of economically important pest species (Lamp et al. 1994). Additionally, species of Vaccinium have been shown to have natural resistance to certain Cicadellidae (Meyer and Ballington 1990), suggesting species present on V. globulare may be specialized.

Of the 112 leafhopper specimens collected from V. globulare, 84 were of a single species, Dikraneura carneola (Stål). This species appears to be polyphagous and is a known vector of Western-X disease of stone fruits (Prunus spp.) (Kaloostian 1952). Western-X, caused by a phytoplasm, can cause serious damage to fruit crops like sweet cherry, chokecherry, plum, and peach. The phytoplasm is vectored by leafhoppers, and plants such as clover (Medicago and Trifolium spp.) and dandelion (Taraxacum officinale F. H. Wigg) are known weed hosts able to harbor the pathogen (Gubler and Teviotdale 2015). Since so little is known about the leafhopper fauna in Montana’s forests, the V. globulare / insect association found here is one that warrants further study. Possible questions to be addressed include 1) are the D. carneola leafhoppers collected on V. globulare carrying the Western-X pathogen? 2) is V. globulare susceptible to Western-X disease? and 3) could V. globulare be a reservoir host of the Western-X pathogen or a reservoir host of D. carneola populations? The distribution of aphids on the V. globulare plants suggests that there is little cause for concern. They were rarely collected from the plants, and were in small numbers when they were (never more than two individuals on a plant). The individuals collected were a diverse assemblage, plus, in healthy ecosystems, aphid populuations are typically kept under control by natural enemies. This suggests there is not a specialized aphid species attacking huckleberry plants.

Twenty Miridae specimens were collected from V. globulare leaves and stems. Seventeen of these were Lygus hesperus Knight, the western tarnished plant bug, which is a species known to cause significant damage to fruits and berries (Zalom et al. 2014). All L. hesperus were collected from leaves and fruit at just one site in 2015, while the berries were ripe. Additionally, some of the berries at this site were observed to have puncture wounds and appeared deflated or smashed. The presence of this species, especially in association with damaged fruit, suggests the potential for economic damage and may warrant further study. 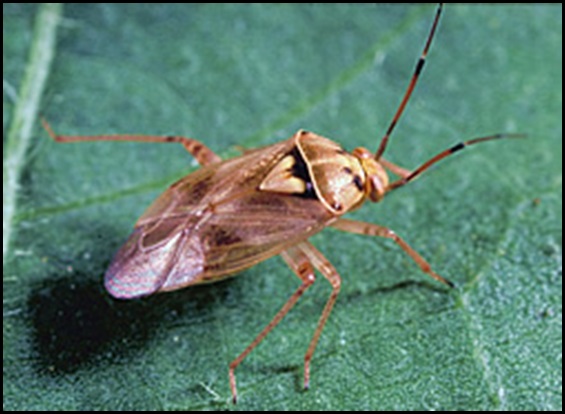 Lygus bug, Lygus hesperus, collected on V. globulare leaves/stems.Lygus hesperus, a known pest of cultivated fruits, were collected from the leaves, stems, and berries at one site in 2015. Photo: ars.usda.gov.