Wasps in the family Vespidae, subfamily Vespinae, made up 23% of the insects observed visiting flowers across multiple sites in both years. Like bumble bees, overwintered Vespinae queens emerge from hibernation in the spring and use the carbohydrates in nectar for energy (Akre et al. 1980). Fifty-six percent of the Vespinae collected from V. globulare flowers at multiple sites in both years were Dolichovespula arenaria (F.), the aerial yellowjacket. This species is known to be one of the most common and widespread yellowjackets in boreal forests of North America (Akre et al. 1980). Two other Dolichovespula species, Dolichovespula maculata (L.) and Dolichovespula norvegicoides (Sladen), accounted for 26% of the Vespinae flower visitors in 2014. Dolichovespula norvegicoides was collected at a single site in 2014, but at multiple sites in 2015. Though little is known of the biology of these two species, they are both common in boreal forests of North America (Akre et al. 1980). Dolichovespula arctica (Rohwer) and Vespula austriaca (Panzer), which together constitute 4% of the Vespinae flower visitors, are social parasites of other Vespinae. Three D. arctica individuals were collected at two sites in 2014 and one V. austriaca was collected in 2014. Four species, Vespula acadica (Sladen), Vespula consobrina (Saussure), Vespula atropilosa (Sladen), and Vespula vulgaris (L.), together account for the remaining 14% of vespid flower visitors. Of these, V. consobrina was collected only in 2014, while the others were collected at multiple sites in both years. No invasive V. germanica were collected at any of the study sites.

Unlike bees that actually forage for pollen as a source of protein for larvae, individual Vespinae visiting flowers are only seeking nectar for energy before constructing nests or seeking out prey as a protein source for larvae (Akre et al. 1980). So, while there may be some incidental pollen transfer, it is unlikely that these flower visitors are contributing pollination services. Additionally, on two occasions in 2014, D. maculata was observed biting through the outside of a flower (T. T. Kelly, M. A. Ivie, personal communication 2014), a behavior associated with primary nectar robbers (Irwin et al. 2010). 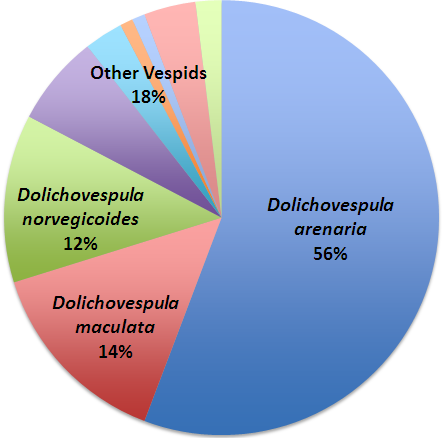