Bees in the genus Andrena accounted for 10% of the flower visitors observed at study sites in 2014-2015. Of those, 87% appeared to be of one species, Andrena cf. thaspii Graenicher. Andrena are difficult to identify to species, but all species whose biology is known are solitary ground-nesters (Michener 2007) and many are known to forage in low temperatures when other bees are not yet active (LaBerge 1980). Thus, the role of Andrena in the pollination of early season flowers like V. globulare may be substantial. Andrena thaspii is known to be widespread in boreal regions of Canada and the U.S. and has been recorded from Montana (LaBerge 1980). There is a great deal of intra-specific variability (LaBerge 1980) that makes positive identifications difficult. 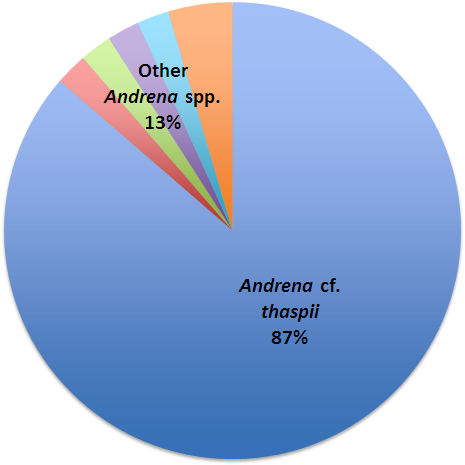 Andrena Species Visiting Vaccinium globulare Flowers. In 2014-2015, 44 total andrenids were collected from V. globulare flowers. 87% of these were just one species.