Honey bees (A. mellifera), which are not native to North America, were only collected from V. globulare flowers at one study site in 2014, the site closest to the town of Troy. They were absent from the flowers and the pan traps at all of the other sites, indicating that, in general, this domesticated pollinator is not common in huckleberry habitat in Montana. Honey bees are known to be important pollinators, but do not have the ability to buzz pollinate (De Luca and Vallejo-Marin 2013), so it is likely that they are opportunistically collecting nectar from V. globulare when it is available, without contributing pollination services. 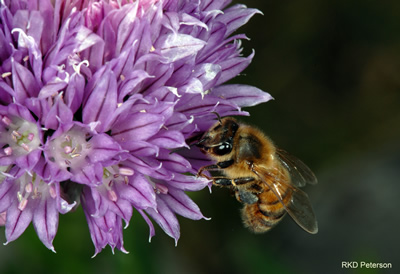 Apis mellifera Non-native honey bees were only collected from V. globulare flowers at one study site in the Kootenai National Forest in 2014. Photo: RKD Peterson at www.montana.edu/yellowstoneinsects/contents.html.