Bumble bees made up 47% of V. globulare flower visitors. All bumble bees collected in 2015 and 80% of those collected in 2014 were queens. Because mated, overwintered bumble bee queens are known to emerge in early spring and forage for nectar from any available flowers before initiating a new colony (Williams et al. 2014), it is not surprising to find them to be the most common visitor during V. globulare anthesis in May and June. Many of the bumble bees visiting the flowers appeared to be buzz pollinating the flowers.

Nine different Bombus species were collected from the flowers, though only four accounted for 91% of the total: Bombus bifarius Cresson, Bombus melanopygus Nylander, Bombus mixtus Cresson, and Bombus sitkensis Nylander. All four of these species are common, western North American species known to inhabit montane environments in the western half of Montana (Williams et al. 2014, Dolan 2016b). Bombus bifarius, B. melanopygus, and B. mixtus were collected across multiple sites in both years. Bombus sitkensis was only collected at sites in the Kootenai National Forest in 2014 coincident with the fact that its range in Montana is limited to the far northwest (Williams et al. 2014, Dolan 2016b). Of the remaining five Bombus species, Bombus flavifrons Cresson is another common western Montana bumble bee, known to be found in montane forests (Dolan 2016b) and was collected at multiple sites in both years. Two species (Bombus insularis (Smith) and Bombus flavidus Eversmann) are social parasites of the subgenus Psithyrus that are commonly collected in the western half of Montana (Dolan 2016b). Both of these species were collected at multiple sites in 2014. The remaining two species, Bombus centralis Cresson and Bombus occidentalis Greene are widespread in Montana, but more commonly collected in valleys, foothills, plains, or urban areas (Williams et al. 2014, Dolan 2016b). These last two species were only collected in 2015 at the Lava Lake site in the Custer-Gallatin National Forest.

Because bumble bees are known to be efficient pollinators, especially for plants like V. globulare with poricidal anthers (De Luca and Vallejo-Marin 2013), and because Bombus species were the most frequent V. globulare flower visitors, it is likely they are important pollinators of this plant. However, Bombus species are also widely known to be nectar robbers (Irwin et al. 2010), collecting a nectar reward without contributing pollination services. Exclusion experiments (Kearnes and Inouye 1993) are needed to elucidate the roles of different flower visitors in the pollination of V. globulare. 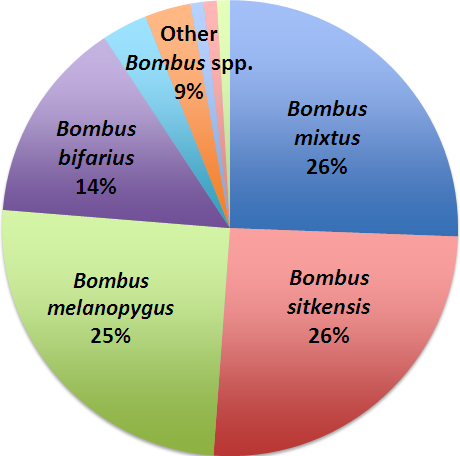