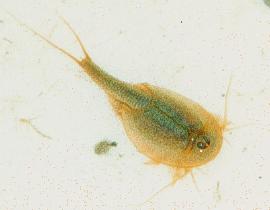 Crustaceans, carcinology, the insects of the seas. A large group of unsettled rank (phylum, subphylum, superclass, or class). Ancient and very diverse, but not nearly as rich in species as are the insects. Over 40,000 species occur worldwide, most are marine, about 10% are freshwater and, only a few are terrestrial. The chitinous cuticle of larger species is calcified.

Diverse! All non-insect, non-arachnid aquatic arthropods. Most have 2 pairs of antennae, and many pairs of segmented appendages, typically with gills for gas exchange. The appendages are basically biramous (protopod, endopod, exopod).

The trunk is primitively composed of many similar segments each with similar biramous appendages, more advanced groups have uniramous appendages, fewer segments that are more specialized or fused into distinct regions (thorax and abdomen), part of the thorax may be fused to the head (cephalothorax).

Terminal telson is usually not counted as a segment.

Most crustaceans are dioecious with copulation, but parthenogenesis is common and hermaphroditism sometimes occurs. Marine forms often have a series of planktonic larval forms (nauplius, zoea, megalops, etc.). Freshwater species tend to have more direct development and to brood the eggs. Females may produce a single or multiple broods per season or alternate between sexual and non-sexual (parthenogenetic) reproduction. Molting may continue after the adult stage is reached. Resistant eggs are common. Non-emergent, only resistant stages may disperse over land. Cyclomorphosis occurs in some species.

Free-swimming and filter-feeding by way of setae is primitive in Crustacea and still widespread. Others are benthic or intermittent swimming filter-feeders. Others crawl or burrow and feed as herbivores, scavengers or carnivores. A few are parasitic.

Often rather simple, at least by insect standards, with few species, though some in great abundance. Crustaceans occupy nearly all oxygenated aquatic habitats, including intermittent ponds, saline ponds, hot springs and deep lakes. The species are separated by micro-habitat, habits, body size, food size, seasonality, or time of activity. They are the dominant macroinvertebrates in the open water of large lakes and reservoirs, but shallow, heavily vegetated lentic water has the most species. Some species have considerable diurnal vertical migrations. Many species occur in interstitial areas, subterranean waters (troglobites), and groundwater.

Important primary and secondary consumers in many aquatic systems, critically so in limnetic waters. Some species support direct fisheries and aquiculture for human food or fish bait, important fish and wildlife foods, some may help control aquatic vegetation, many are good environmental indicators for metals, acid rain, global warming, etc. Parasites may destroy hatchery fish, some serve as intermediate hosts to other parasites, some may out-compete fish for food or prey on the fish directly, some damage underwater wood, dense populations may clog filters, burrowing crayfish may denude farmland and destroy earthen dikes and dams.

Most major groups occur worldwide, species of small body size or those with resistant eggs may also be globally distributed. In general, most groups have a few species that are widespread and many species that are endemic to single stream systems or to caves, some of these are endangered. Many groundwater species evolved in deep refugia from surface fluctuations, some of these survived under the continental ice sheets.

Plankton nets and routine benthic samples will get many of the "important" species. Many require very fine nets. Some plankton species require large nets worked very deep or on dark nights. Crayfishes may be better trapped or picked up at night by using headlamps, interstitial and ground-water species may be filtered from pumped water or taken in springs. Lighted bottle traps take many species in abundance, even very small ones.

Small crustaceans can be adequately fixed directly in 70-80% ethanol. Larger specimens are best fixed in neutral 5% formalin and transferred to 70% ethanol within a few days. Kahle's fluid quickly decalcifies crustacean exoskeletons, but preserves the rest very well. Isopropyl alcohol is of no use with crustaceans as they become explosively brittle. Briefly boiling the specimens in water or 70% ethanol is often a suitable substitute for formalin. Most color patterns are lost during storage so notes should be taken while the specimens are fresh.

Fairly well studied at the order and family level. Higher level relationships are more difficult. Some species are well known, but many are known only from the original description, and some remain undescribed. Juvenile instars and the "wrong" sex can be very difficult or impossible to identify. Many species identifications require carefully prepared slide mounts.